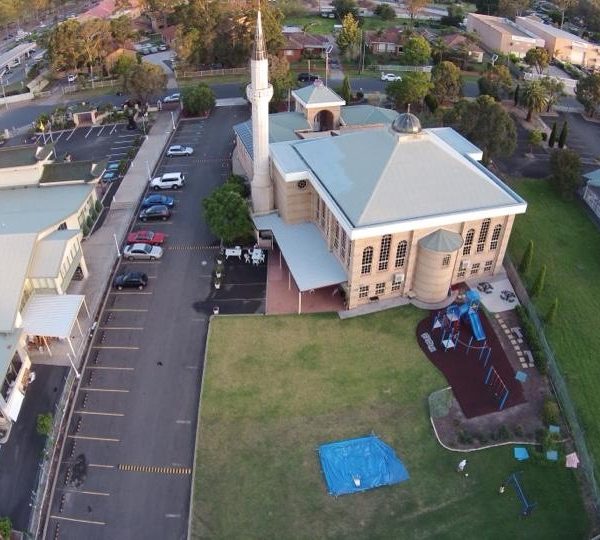 Bonnyrigg Turkish Mosque
The construction of this 500 square metre mosque began in 1992 on a piece of land leased by the NSW State Government to the Bonnyrigg Turkish Islamic
Cultural Association.

Culture and community
Until 1968, Turkish immigration to Australia was small. The first large group of Turkish immigrants arrived on our shores under the Turkish Australian Agreement of 1968. Most of them were Muslims from Anatolia. Nowadays, there are nearly 28 000 Turkish-born people in Australia and a third of them have settled in Sydney, especially in the western suburb of Auburn. Although relatively small, the Turkish community in Fairfield – around 2 000 – began taking shape in the 1970s.

Since the early days of the Bonnyrigg Turkish Mosque, the local Turkish community has been providing financial support and also the labour of hundreds of volunteers.

Architecture and symbolism
This cream coloured, brick, solid, square building, features the three main
elements of traditional Turkish mosques: a prayer hall, the qibla wall and the
courtyard. The spacious prayer hall accommodates an impressive roof topped with a soaring central light -filled dome and supported by solid columns.
Forbidden by Islamic law, statues or other images of living beings are uniformly absent from the mosque. The floor of the hall is covered with multi-coloured rugs where the faithful recite their prayers on their knees. Hanging lamps, candlesticks, stands for holy books and platforms for readers have been placed in the interior. Since only men can enter the floor of the prayer hall, a large second floor balcony was built where women can access through two side doors.

Activities
The mosque is the place where some of the most important religious celebrations are held. Every day, the mosque’s walls are filled with salat – the five daily prayers
performed before sunrise ,noon, the afternoon, at sunset and later in the evening.

On Friday’s – a holy day for Muslims – the Mosque is filled
with up to 500 people. The Friday prayer at noontime incorporates a sermon that the Imam gives to the congregation.

The most important celebration is during the month of Ramadan. During Ramadan – one of the five basic pillars of Islam is that all Muslims must fast from dawn until sunset. It is regarded as a celebration of purification. The feast at the end of the month is called Eid ul-Fitr. Other celebrations include the Eid-Ul-Adha which marks the end of the annual pilgrimage to Mecca (Hajj);